Chronic Granulomatous Disease (CGD) is also known as chronic dysphagocytosis. This is a rare inherited disease developing due to the malfunction of the immune system resulting in immunodeficiency. Thus, the body becomes vulnerable to various diseases and infections from microbes resulting in the individual prone to the sickness that would normally be very mild in healthy people. Hydrogen peroxide is needed for the immune system to fight against the microbes and the individuals affected with CGD, the production of hydrogen peroxide is lacking. 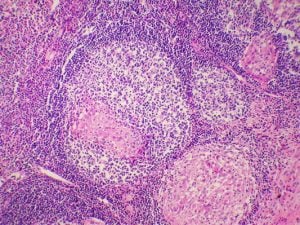 Hence, these individuals have recurrent bacterial infections. Occasionally, the inflammation may occur in different tissues called granulomas which may cause damage to the tissues. These individuals are healthy till they have the onset of infections and hospitalization may be required due to the severe symptoms.

The mutated CYBB gene is responsible for the cause of CGD and is inherited in an X-related recessive pattern. This gene is present in the X-chromosome, which is one of the sex chromosomes. Males are prone to be affected with this disease because of the single defect X chromosome they carry. The females carry two X chromosomes, so both have to contain the defect gene for them to develop this disease. As it is unlikely that females carry two defect genes, males are more prone to inherit this disease than the female. Males inherit this single X chromosome from their mother, and if there is a defect in the gene, the male child will develop this disease. If the mother passes the defect gene in the X-linked disorder, it is likely that her daughter will be the carrier or the non-carrier of the disease and the son to be affected or not affected by the disease. The male cannot inherit the X-liked gene from their fathers as they can only pass on the Y chromosome to their male offspring.

Mutations in 5 different genes associated with five different conditions can cause CGD. The mutations in the genes CYBA, CYBB, NCF1, NCF2 or NCF4 can result in the dysfunction or no production of the protein that are part of an enzyme called NADPH oxidase essential for the proper function of the immune system. However, some individuals do not necessarily have the mutation in any of these genes, and hence the cause of the disease in these individuals is not known.

Some forms of severe infections could result in bone infections and abscesses in the liver, lungs or brain. Individuals may develop serious infections at least every 3- 4 years. The recurring infections and inflammation tend to reduce the life expectancy in the affected individuals, however, with appropriate treatment, they can continue life till mid – late adulthood. They are also prone to develop a condition called mulch pneumonitis after exposure to decaying organic matter such as leaves and hay resulting in shortness of breath and fever. The other associated symptoms may include granulomas developing in the gastrointestinal tract and the genitourinary tract resulting in the bloody stool, vomiting, diarrhea and nausea. The granulomas in the gastrointestinal tract may cause tissue breakage and abscesses production. The inflammation may also develop in the kidneys, bladder, lymph nodes and bone marrow which can further affect the immune system with its ability to produce the essential immune cells.

One of the accurate forms of diagnosis is to measure the level of hydrogen peroxide in the phagocytes. The other test requires a procedure called nitroblue tetrazolium slide test involving blood sample to obtain white blood cells.

Treatment may include antibiotic therapy to prevent the onset of infections. However, in some individuals, bone marrow transplant has been successful.